Recently, another toothpaste giant has fallen to the point of selling!

It is reported that 57 “Tianqi” trademarks related to Tianqi toothpaste (the evaluation value is about 50 million), and the ownership of the trademark, Guangxi Oqili Co., Ltd., will be on June 11th, in Ali’s judicial justice The auction platform will auction some real estate and production equipment. The total price of all property participating in the auction was 233 million yuan, and the starting price was 163 million yuan.

Fifteen years ago, Tianqi toothpaste had sold more than 400 million yuan and sales reached 1 billion. What was the reason that made the former glorious domestic giants defeated?

Founded in 1945, the company was a large -scale daily chemical enterprise that has been baptized for more than 60 years. It owns many famous brands such as “Tianqi” and “Oichili”.

In the most glorious period, Tianqi toothpaste occupied half of the Chinese toothpaste market.

*In 2004, “Tianqi” toothpaste sales sold more than 400 million yuan, with sales revenue of 1 billion yuan. A single product sold 260 million yuan a year, and entered the top four in the domestic toothpaste market in one fell swoop.

*Since 2003, Oqili has diversified rapid expansion on Tianqi series products with the popularity of Tian Qi toothpaste, and has since embarked on a long way to reorganize.

*In October 2014, “Tianqi” toothpaste was discontinued.

*In May 2016, Oqili announced the successful asset reorganization, and the “Tianqi” toothpaste began production.

*In 2019, Oichili announced the auction of 57 trademarks related to Tianqi toothpaste.

Oichili Company in 2002, as Xiaosheng took over, after taking office, he began to reshape the image of Tianqi.

Yu Xiaosheng positioned Tianqi toothpaste as the formula and Chinese medicine as the formula, suggesting that consumers have the effects of anti -inflammatory and sterilization.

Sure enough, under the double stimulus of product innovation advertisements, Tian Qizhi became a dark horse of domestic toothpaste.

After the results of the first sight, Oichilima began to expand the product production line.

In turn, the Tianqi handicrafts, Tianqi handicon, Tianqi shampoo, and Tianqi laundry powder were launched to the market.

In the SARS period in 2003, hand -toakers and hand washing fluids that focused on sterilization effects were sold under the special environment for a while, and then silent.

The sales of shampoos are also a flashy, blamed by the company as a packaging problem.

Because of the production line of laundry powder, Oichili could only be outsourced to other factories. The quality control was not in place. Under the strong squeezing of foreign brands and local brands, she hurriedly exited.

By separated from the actual diversified strategy, the energy of the production, research and development, and sales of Tianqi toothpaste has dispelled, leading to the investment in the innovation and promotion of the product in the later period, which is obviously weak and gradually micro.

2. miss the opportunity, the channel is limited

After the failure of the diversified strategy, Oqili began to go downhill.

By 2014, Tian Qiyin’s parent company Oqili had a shortage of funds and was forced to discontinue production.

In May 2016, Oichili conducted asset reorganization and tried to revive the brand.

The company transferred the operation center and scientific research center to Shanghai, and Tianqi toothpaste was re -put into production.

However, Tianqi toothpaste, who was absent for two years, had long been pondering the changes in the market. When it “re -re -entered the rivers and lakes”, it was found that the toothpaste market had already been divided.

Tianqi toothpaste, who missed the opportunity to develop a good opportunity, had to confront brands such as Yunnan Baiyao and bamboo salt, which also focused on herbal effects.

They have added 75%of the toothpaste market.

How many opportunities to leave Tianqi toothpaste?

Not only that, Tian Qi also faces the embarrassment of limited sales channels.

Because the sales volume is not good, whether it is an offline business and an ultra -channel or an e -commerce platform Taobao, because of its sales problems, it has repeatedly turned on the red light to it.

Increasing the wealth management company under the shareholders Qinlian Group is suffering from the crisis of redemption. Tian Qi wants to come back to Dongshan, which is naturally difficult to add.

Facing the toothpaste market, as a Chinese, it really sighs.

Since the 1990s, foreign -funded daily turmoil has been fierce. Under the continuous fighting of domestic brands and foreign brands, local brands have lost miserable.

The most distressed thing about the most distressed is that the “China” toothpaste, which originally carried the sense of national glory, was also acquired by Unilever (Britain) in 1994 to obtain the operating rights and marketing channels of the Chinese brand.

In contrast, foreign brands such as Gaoling Jie and Jiajieshi have successfully occupied nearly 70%of the market share.

Don’t be discouraged, hope there are still.

According to the relevant data of the China Business Industry Research Institute: 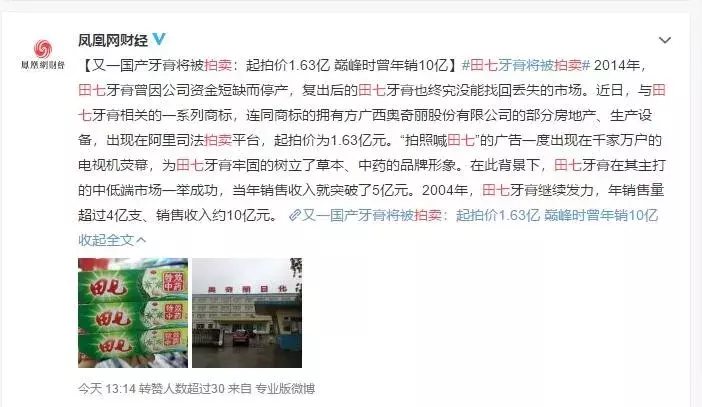 In 2018, among the top five toothpaste brands, local brands Yunnan Baiyao ranked fourth, and in the top ten, cold acid and two needles were also among them.

In the future, the toothpaste market will present 3 development directions:

3. E -commerce and WeChat are important forces to promote the development of industry science and technology.

After all, the market is cruel, and good products have the right to speak.

Chinese goods should be self -improved. I hope that one day, people around them are scrambling to buy, and more Chinese manufactured.